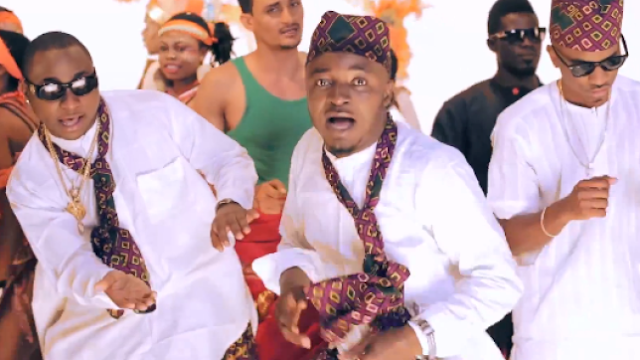 What led to the beat down started with an argument between B-Red (Davido’s cousin and HKN artiste), and MC Galaxy. MC Galaxy claimed he was more popular than B-Red. The HKN act disagreed to the statement saying he was more popular than MC Galaxy. The back and forth continued for while till Deekay, a Ghanaian act on HKN said MC Galaxy was not funny as a comedian.
MC Galaxy took exception to this and this led to insults. Davido came in on the argument and told MC Galaxy to leave the studio because he did not like him insulting his artistes.
“David didn’t like that Galaxy was yabbing his boys and asked him to leave. Before Galaxy could react, David hit him on the back. Then his driver, Lati, took over, punching Galaxy and then hit him on the head with an Orijin bottle. B-Red didn’t touch Galaxy and Shizzi was very upset about what was happening in his studio and tried to stop the fight. Shizzi was really upset that Galaxy was attacked. If you see MC Galaxy’s eyes now” the source told Linda Ikeji.
MC Galaxy was contacted and he confirmed the assault happened. “Yes, I was attacked by Davido, his driver also broke a bottle on my head. Davido is someone I love and I am surprised he did this. His manager Kamal has called to apologize to me” said the singer.
In 2013, MC Galaxy featured Davido on his debut single ‘Nek Unek’.
Next Post

Davido sets to release another hit single with chris brown

Trophy presentation would be live at Anfield after there next Game a Big Congratulations to Liverpool the Draught is Over.