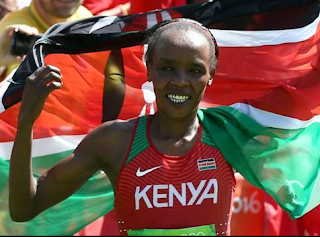 The 32-year-old was found to have taken banned blood-booster EPO in an out-of-competition test in her home country.  Sumgong, who also tested positive for a banned substance in 2012, won the London Marathon in 2016 before claiming gold in Rio, becoming the first Kenyan woman to take the title.

Her ban starts from April 3rd 2017, when she was provisionally suspended.  The banned substance, EPO, also known as erythropoietin, is a hormone that can increase endurance and, in athletics, is used mainly by long distance-runners.

Between 2011 and 2016, more than 40 Kenyan track-and-field athletes failed doping tests.  Among those sanctioned was Sumgong’s former training partner Rita Jeptoo, 36, who was banned for four years following a positive test for EPO in 2014.

Nicole Murphy sexy as she pumps fuel in her car

ByAuthor adminPosted on October 3, 2017
New addition to the Spain squad, Jonathan Viera insists Gérard Pique remains very committed to the squad. The Barcelona defender was booed during an...

Zidane: I Will Eventually Be Sacked

ByAuthor adminPosted on October 6, 2016
Zidane says he does not fear the axe that seems to loom over him and believes Madrid will sack him one day.The former Madridsta...
SPORTS
ByAuthor David Odinaka UchePosted on May 28, 2020

English football will not return until April 30 “at the earliest”, it has been decided at an emergency meeting between Premier League clubs, but the 2019/20 season will be extended indefinitely.

Officials from all 20 English top-flight clubs spoke over a conference call on Thursday morning to co-ordinate a strategy for completing the fixture list in the wake of the coronavirus pandemic which has led to the suspension of almost all sport.

The deadline for returning to action has also been extended indefinitely as part of an agreement with the FA.

It is understood the discussions centred very much on the here and now, although clubs were shown modelling of how the schedule could look using a variety of possible resumption dates.

Crucially, it is understood no clubs present raised the possibility of the 2019-20 season being declared null and void. West Ham vice-chairman Karren Brady had suggested that was one solution in…

President Buhari appoints 42 diplomats as an Absu lecturer happens to be one them. See list